21.04.2016 > Showing and discussing vulnerability in Switzerland is also looking at overcoming it 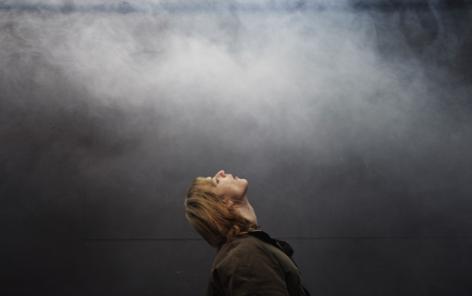 The National Centre of Competence in Research LIVES supported the work of three young photographers for six months. Their pictures will be displayed at the upcoming Biel/Bienne Festival of Photography from 29 April to 22 May 2016. A publication entitled Downs and Ups. Visual Insights into Vulnerability and Resilience during the Life Course gathers some of these pictures and, over three chapters, describes the issues at the heart of life course research. The festival will also be hosting a round table event on 13 May at the Biel Congress Centre on "In/Visibility: Vulnerability in Switzerland – a non-issue or a real taboo?"

In mid-2015 three young women won an invitation-based competition launched by the NCCR LIVES and the Biel/Bienne Festival of Photography. They had been asked to propose a project based on the concepts of vulnerability and resilience. The artists then had from July to December to create their images. The adventure is now reaching its climax with the exhibition of these three series at the festival, which opens on 29 April. But the adventure will not really end after the exhibition closes on 22 May, because a book is being released containing a selection of these photographs accompanied by texts that explain to the general public what the scientific approach is to life course research.

Simone Haug worked with retired acrobats – former nomads who had had to resort to a sedentary lifestyle, artists who had reverted to total anonymity, former gymnasts who had to cope with a failing body. In the publication Downs and Ups, this presents an opportunity for Prof. Laura Bernardi to explain how the many threads that weave our lives are interconnected and able to cause stress or, on the contrary, provide compensatory resources. Familial, professional, residential and health paths overlap and sometimes conflict, but they can also be sources of solutions with respect to each other. The safety net is not always where you expect it.

Delphine Schacher engaged with the residents of the Bois des Frères, a complex of wooden huts just outside Geneva, awakening the childhood memories of Prof. Dario Spini. The son of immigrants and now Director of NCCR LIVES, he contemplates through the eyes of an adult and a researcher the different levels at which these life courses have an impact – an observation starting from the physical body and ending with the social norms that govern us all. Precariousness, marginality, resourcefulness and hope collide in the both harsh and fraternal environment of the subjects of the photographs, and in the professor's analysis.

Annick Ramp accompanied a transgender person, Sandra, aiming to show the inherited strengths and weaknesses of an out-of-the-ordinary destiny, marked by suffering, struggles, and victories. The book provides an opportunity to understand the importance of observing life courses over time. There is a focus on the accumulation of disadvantages and on how individuals construct their own narrative, thus forging their identity on the basis of critical steps and transitions.

Life course research is not familiar to the general public. In Switzerland it enjoys the support of the government, which has established a National Centre of Competence in Research funded for twelve years by the Swiss National Science Foundation. Since 2011 this has allowed roughly 150 researchers in the social sciences from a dozen universities and higher education institutions to conduct several longitudinal studies focusing on vulnerability, defined as a lack of resources (which can be psychological, physiological, social, economic, cultural and institutional) in the face of stressful events or phases in life (divorce, unemployment, migration, ageing, bereavement, etc.).

From this perspective, anyone can be affected by vulnerability at some point in their life. And as it is a dynamic phenomenon, it is not possible to conceive of vulnerability without its counterpart, resilience, whose origins need to be understood. Indeed, the study of life courses shows that while individuals are marked by their social and historical context, they also enjoy a certain capacity to act (what we call “agency”) and never stop developing throughout their lives.

Part of the funding for NCCR LIVES is also intended for projects aiming to transfer knowledge to the general public, hence this collaboration with the Biel/Bienne Festival of Photography. The objective is first and foremost to use a language accessible to all – images – to address key issues that are often overlooked. Offering a platform for young photographers is another motivation for our research centre, which has already published several scientific articles focused on atypical occupations or the professional integration of young people.

As well as the three displays and the book, there will be a round table event on 13 May at the Biel Congress Centre. The issue of the visibility or invisibility of vulnerability in Switzerland will be discussed, with the aim of allowing debate with the public. Is vulnerability shown too much or not enough? Where can it be found? How can it be dealt with? Hosted by journalist Dominique Antenen, the event will bring together Felix Bühlmann, a sociologist at NCCR LIVES, Jérôme Cosandey, from Avenir Suisse, Eric Fehr, Mayor of Biel, Thérèse Frösch, co-president of the Swiss Conference of Social Action Institutions, and Delphine Schacher, photographer.

In a town at the crossroads of French and German cultures, with one of the highest rates of social assistance in Switzerland, this series of events in Biel promises an interesting national debate.

>> Round table In/Visibility: Vulnerability in Switzerland – a non-issue or a real taboo? 13 May at 6.15pm, Biel Conference Centre (simultaneous interpretation French/German).

>> Full programme of the Biel/Bienne Festival of Photography available at http://www.bielerfototage.ch/en