28.02.2017 > Older people's views on their past and their relatives are conditioned by social structure 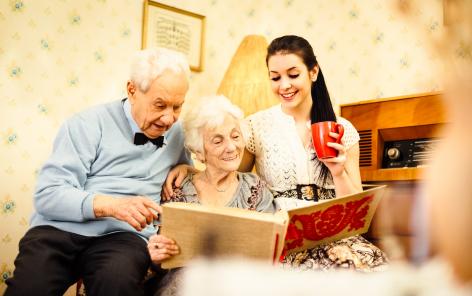 Two recent doctoral theses carried out within the NCCR LIVES, and which are based on data from the Vivre/Leben/Vivere survey, explore the ageing process from very different angles while reaching similar conclusions. Nora Dasoki at the University of Lausanne focused on autobiographical memory, and Myriam Girardin at the University of Geneva explored family configurations. Both show that in retrospect, the context weighs heavily on the individuals. And in doing so, they somewhat challenge the sacred nature of the family.

What is left when life draws to a close? This question is implied in both of the theses presented within days of each other at the University of Lausanne and the University of Geneva. Both pieces of research drew on data from the Vivre-Leben-Vivere (VLV) survey, which is carried out by the Center for the Interdisciplinary Study of Gerontology and Vulnerability (CIGEV) and funded by the Swiss National Center of Competence in Research LIVES – Overcoming vulnerability: Life course perspectives (NCCR LIVES). On 3 February 2017 in Lausanne, Nora Dasoki defended her doctoral research entitled "Autobiographical memory and ageing: Representations of periods of happiness and vulnerability”; On 13 February in Geneva, Myriam Girardin presented her work on " Family configurations in the last stages of life".

The VLV study brings together a wealth of information on the retired population in Switzerland. Nora Dasoki's and Myriam Girardin's theses focused on the results of the first wave (2011-2012) of questionnaires. However, the two doctoral researchers used different approaches: Nora Dasoki adopted a psycho-social perspective, using as a tool "life calendars" on which respondents marked the various stages of happiness and vulnerability experienced throughout their life course; Myriam Girardin used a sociological perspective with a focus on network analysis in order to describe the different types and modes of family relationships, indicating the quantity and nature of social capital offered by each one.

The common ground shared by these two theses lies in the significance of social norms and of the structural context in the assessments older people make of their past and their close relationships. To some extent, however, both researchers provide a fresh look at certain clichés relating to the fundamental importance of the traditional family. But in particular, they also point out how significantly people's lives continue to be affected by social and gender inequalities.

For instance, Nora Dasoki shows that people who did not have children do not experience fewer periods of happiness throughout the course of their lives than those who did become parents. In general, those people who had children report a peak of happiness around that specific time, but the curve then returns to the same level as for those people without children. Interestingly, men are more likely to identify their wedding and the birth of their children as particularly happy moments, suggesting that they could be more influenced than women by what is known as the "cultural life script", i.e. the social norms or prescriptive expectations of what a "normal" life should be like. Nora Dasoki explains this difference by the fact that motherhood involves greater sacrifices than fatherhood: women are therefore less likely to idealise the past.

In her thesis on the effect of family configurations in later life, Myriam Girardin shows that 20% of older people with children do not identify them as being among the most important people in their family network. Significant members of the family unit can also be siblings, relations in the wider family or close friends. This is far from the image of the classic nuclear family central to gerontology where the traditional model is a resource which ensures emotional and physical wellbeing in the 3rd and 4th ages. According to the researcher, the family is actually a highly ambivalent arena involving varying degrees of support and tension.

Without going into the detail of the six family configurations outlined in this work, we will consider for a moment the marked gender asymmetry identified by Myriam Girardin: older people whose daughter is the most significant person in their network benefit from a lower social capital than those whose family configuration places a son in the central role. In this case, the network is denser and characterised by stronger links of interdependency, often associated with a pivotal role taken by the daughter-in-law in providing support. Sons-in-law are almost never identified as significant people in configurations based around the daughter, who is left alone to support her elderly parent(s).

The importance of structure

These two theses perfectly illustrate the predominance of the structural context in people's lives. By exploring family configurations, Myriam Girardin highlights the cases of isolated people who have almost no significant loved one to count on. This situation especially affects those on low incomes and in poor health, mainly women who are widowed, single and/or childless. The researcher emphasises how important resources are in fostering reciprocity and ensuring a later life that is rich in emotional connections.

Meanwhile, Nora Dasoki identifies a difference between memories of happiness and vulnerability. She argues that these two processes use different mechanisms, highlighting the importance of social norms and historical representations. Her thesis confirms that memories of happiness remain longer than recollections of difficult times. It also teaches that memories of vulnerability are very significantly associated with collective experiences such as war. Younger people, who can scarcely remember this period, record it as a time of vulnerability, but state that they experienced other moments which were just as difficult thereafter. Older people, who were entering adulthood in the 1940s, have never again been through such a difficult time in the rest of their lives.

There are many other aspects to be explored in these two wonderful theses, especially their contributions to socioemotional selectivity theory, which states that towards the end of their lives, individuals focus on positive emotions, sorting through their various memories and relationships. But given that space is limited here, we will simply underline how impressed the thesis committees were with these pieces of research and encourage those interested to read them to fully benefit from their insight.

The child penalty is widely regarded as a main driver of the gender wage gap. This paper contributes to the literature by combining an event study framework with instrumental variables (IV) using the outcomes of in vitro fertilization (IVF) in Norway as instruments.

>>>More
Housing and social ties: what are the challenges for senior citizens?

Life expectancy is increasing, and with it challenges related to the living environments of senior citizens. The Rendez-vous Leenaards Age & Society 2019 event will address these issues on Thursday, 28 November, from 16:30 to 18:30 in Pully (free and open to all upon registration).