28.09.2017 > The baby boom, zenith of perfect housewifes, explained through macro- and microanalyses 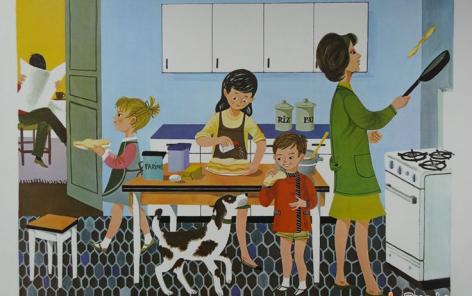 The baby boom, zenith of perfect housewifes, explained through macro- and microanalyses

Aline Duvoisin defended her thesis with verve and assurance on 12 September 2017 in relation to the life courses of women of childbearing age between the 1940s and 1965. She paints a detailed picture of a major demographic phenomenon that is still poorly understood, using an approach which puts an emphasis on personal testimonies in order to complement the statistical analysis. Her research reveals an era when everything tended to push women into marriage. Or rather the end of an era...

"An international phenomenon, totally unforeseen, unique and overwhelming in nature", the baby boom has given rise to many interpretations without obtaining a consensus on its real causes. Aline Duvoisin's thesis enables us to move beyond the usual theories, which are often based on an essentially economic perspective, and to better understand this particular period within the Swiss context.

An assistant at the University of Geneva, based at the Interfaculty Centre of Gerontology and Vulnerability Studies (CIGEV) and a member of the National Centre of Competence in Research LIVES, Aline Duvoisin shows that this period was characterised by a marked reduction in the age of marriage and the generalisation of the bourgeois model of the “neat and orderly” family.

Socialised in the years between the two world wars, women were imbued in their youth with pro-family discourses extolling the distinction between female and male roles and the incompatibility between employment and parenthood. These norms were conveyed at all levels of society: family, school, churches, youth movements, social and political institutions, legislation and mass culture all contributed to create the ideal of the housewife, respectable and respected "guardian of morals”.

Aline Duvoisin's research has had the impact of a “genuine revelation”, as one of her thesis jury members described it, justifying the advantages of using a "mixed biographical approach" combining quantitative and qualitative data.

Her thesis, largely based on the Vivre/Leben/Vivere (VLV) survey, analyses the life trajectories of 1184 women born between 1910 and 1941 and living in five very distinct Swiss cantons (Geneva, Bern, Basel, Valais and Ticino). For each one of these regions, the researcher was able to benefit from the transcripts of semi-structured interviews conducted by Sylvie Burgnard.

Several types of life trajectories can be discerned, depending on whether the women were married or not, had children or not, and depending on other elements such as career path, the rural or urban context, or the degree of religiosity.

76% of the married women in the sample had at least two children, with the peak of 2.68 children per woman being reached in 1964. Mothers of three or more children were the main contributors to the baby boom - women of faith and those living in the countryside were, unsurprisingly, most prominent among these.

The cohorts observed were better educated than the previous generations, and often went beyond the primary level, but their education nevertheless was still highly gendered, with the proliferation of "household" studies, followed in most cases by a rapid withdrawal from the world of work following marriage.

The testimonies make it possible to understand how these women internalised the current norms. "I have always done the right thing," explains one respondent, recounting her career as a wife and mother of four children. "When I arrived here, I found that the women were behind the times" recalls the other, having grown up abroad before settling in Valais.

"At one time or another during their life courses each of these women experienced an event which reminded them of their place in society," notes Aline Duvoisin.

She observes that the normative pressures felt most strongly by the cohorts being studied were those mainly exerted on their marital path. Infertility was more readily accepted than "disordered" fertility. Thus, not having a child represented a "less serious" failing than not complying with the norms of conjugality.

We can also see that a significant number of mothers of large families had unwanted, or at least unplanned, children due to a lack of effective information about contraception or because of conservative positions.

Pioneers in spite of everything

This thesis shows that in the end a significant proportion of women nevertheless resumed a professional activity when their children were older. "The ideal of a wife at home evolved towards the ideal of a mother at home which had a profound impact on Switzerland and Swiss women during the second half of the 20th century," notes Aline Duvoisin.

For the researcher, the mothers of the baby boomers "were the initiators of dynamics which their daughters then consolidated and normalised, in this case the return of women to the labour market." On a part-time basis, reflecting a gradual change in behaviour patterns rather than a clean break between the period of the baby boom and the subsequent decline in the birth rate since the 1970s.

As part of the LINES/LIVES research seminars of spring 2020 : "Parcours de vie et inégalités", Vanessa Gash will give a presentation entitled : "The partner pay gap - associations between spouses’ relative earnings and life satisfaction among couples in the UK".